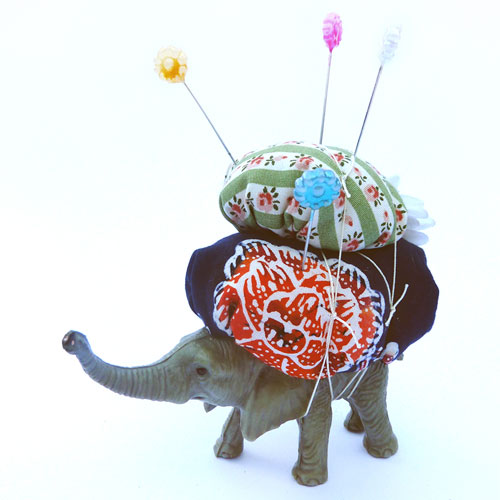 Small House Cottage is going on a Summer Holiday to Whitstable where it will show Annie Taylor’s Grimm fairytale: Fitcher’s Vogel.

Fitchers Vogel is a Grimm tale of three sisters, and a robber bridegroom/sorcerer. This darkly magiccal character entices each sister to his ornately-decorated many roomed woodland abode, and gives her a key she must not use, and an egg she must not put down.

Fitchers Vogel (or Fitcher’s Bird) is a story in the same bloody vein as Bluebeard. The narrative will unfold through textile figures using each room of the Cottage as a chapter. “Some rooms may never be the same again,” warns Ms Whitstable Tail herself.

Two for Joy is a collaboration between Liz Honeybone and Pia Randall-Goddard, who are bringing their textile-based artworks and expertise to SHG this July.

Liz Honeybone is a textile artist and the Senior Dyer in the costume/textile department at the National Theatre (30 years and counting) who also does costume for films. She started out in tailoring, having studied it at the Wimbledon College of Art. “She has always sewn, making and adapting her own clothes.” She has a knack for “making costumes speak through their colour and texture”. During the lockdowns, she “respond[ed] to furlough by making scrubs for the NHS and learning about natural dyes.” Hear her speak about her experiences with her “infectious energy and enthusiasm” in this ‘Breaks and Joins’ podcast (Episode 4) at PlayerFM (the website from which the quotes are heavily borrowed!) where she gives this project a wee mention – https://player.fm/series/breaks-joins-podcast/episode-4-liz-honeybone Check out some of her works on the National Theatre Costume Hire site –https://www.nationaltheatre.org.uk/costume-and-props-hire

Pia Goddard “studied sculpture at Chelsea, but veered off towards photography, which is now [her] main focus. [She] also work[s] in textiles, text, mixed media and ceramics. [Her] themes are archeological, historical, familial, architectural. [She is] also a poet, one of the south London trio, the Rye Poets, and a member of Southwark Stanza. [She’s] been a member of SLWA since the group was formed. [She] also curate[s], write[s] and teach[es].” (as ripped directly from her profile on the SLWA website: https://southlondonwomenartists.co.uk/user/pia+goddard/ )

Both Pia and Liz members of The Skip Sisters, a South London collective of five multidisciplinary artists who have a diverse array practices from one another, but share a common ecological-creative ethos involving rescuing discarded materials and objects from the fate of the landfill, by restoring, repurposing, or up-cycling them with panache, turning them into new, desirable objects to be treasured for years to come. You may recall, we had a Skippy taster show about year ago: Upcycled Minature Treasures in the Attic of Small House Two by three of the Skip Sisters.

Throughout the Summer of 2022, Small House Cottage will be in Whitstable in the care of Annie Taylor, aka Whitstable Tail! Follow her for details of how to see her Small House solo show: Fitchers Vogel (a very Grimm fairytale) this summer.

We won’t be holding The BIG SMALL Summer Open in 2022.

Excited to be able to announce that Karen Piddington is going to have a Small House show in September 2022. It may or may not involve film and/or drawings. Details to be firmed up closer to the time…

Karen Piddington is a Brighton based artist and PhD researcher at Chelsea College of Art (UAL). Her practice-based approach uses sound, film, and sculpture as a form of speculative enquiry into notions of ‘becoming-animal’ and animality. Karen’s work focuses on the paradoxical spaces inhabited by molluscs and insects, and explores how the artwork might enable a reimagining of new multispecies relationships to create a greater awareness of the ecological importance of these animals.

Photo is from a November 2021 blogpost entitled ‘Dirty Stuff’ on Karen’s website. “A well -managed soil can thus be an important buffer against climate change.” The post is about soil biodiversity, carbon storage and about how soil marks time. “How will all the rubbish and destruction appear in geological time in rocks and cliff faces?”

So incredibly pleased that Barbara Beyer is up for making a show for one (or more?) of the Small Houses in the October of next year.

Photo of recent ‘Give and Take sculpture sketches’ by the artist 2021 for All & Some, a pop up group show in November, in London.

See more of her work here:

The Cottage is going on another British adventure – this time to Grimsby, East Lincolnshire (near Hull).

Dale Christopher Wells will be hosting Small House Cottage in his Grimsby gallery for the duration of his show, ‘Sackgassen’…

A direct translation of Sackgassen could be ‘dead end’, cul-de-sac or impasse, but it also could mean ‘Blind Alleys‘ “which provide a sense of terror, uncertainty, cruelty, and disability, all present in the Tales from the Crypt comic story of the same name, and the 70s Hammer film,” remain inspirations for this ever-expanding body of work involving an artistic ‘dystopianisation’ (not really a word, but it’ll have to do) of ‘Britains’ agricultural models & toys.

There’s much to say about this work, and so much more to see, but you’ll have to wait patiently for October 2022! If you are lucky enough to be in Grimsby around then, you will be able to see the show in person. If not, you’ll see it here and on the socials with the rest of us.

So pleased to say that Dale is going to be co-curating subsequent Small House Cottage shows for the Small House project for the foreseeable future! Artists wishing to site their work in the Cottage will simply be able to post their shows to East Lincolnshire rather than South London. Exhibitions will be posted online as per usual, AND, BONUS, people will be able to visit those shows in ‘real life’ too if they’re feeling adventurous, or happen to live closer to the North East than the South East. It’s nice that a part of the project isn’t so London-centric.

Thank you Dale! Looking forward to these collaborations with you!

But first: Sackgassen in October. (It’s going to be bloody amazing!)

Sandra Lane is going to occupy one of the bigger Small Houses over the Christmas months. Her playfully experimental sculpture practice is materials-based and process-oriented, seemingly riffing on exuberant 80s graphics done in Miami Vice pastels and MTV neons, and is as unpredictable as puffy paint doodles on denim in a summer camp crafting session, except Sandra’s offerings are drawn in space, using clay and wire and foam and plaster, cartoony ceramic high-heeled sandals, and hollow socks, or weirdly elongated Shrigley-esque toes with colourfully painted toenails (and other, naughtier body parts). The point of bringing up the puffy painted denim is the explosive adolescent energy of the work, but no, your kid could not do this – well, not without a slew of tech support, experimental fearlessness, a whole lot of trial and error over the course of a decade, and a significant art education (Camberwell and Slade sculpture degrees in Sandra’s case).

Sandra’s work changes scale from show to show, and is exuberantly playful – this is why [April 2021’s Small House artist] Johanna Bolton recommended Sandra for a Small House show when she was introduced to Eldi at Johanna’s Royal Sculpture Society ‘Gilbert Bayes Award’ show, March 2022. (CONGRATS JOHANNA!) Johanna had a hunch that they’d be kindred art-souls.

Photo is of Sandra Lane’s delightful ‘Mini Gallery’ – a maquette of tiny sculptures and drawings from 2015 – taken from her website: 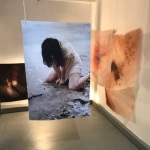 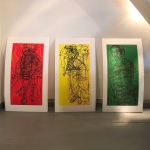 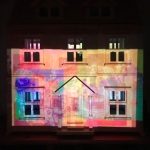